If you've been following the Facebook feed, you are probably aware of the new addition to the Weaver family...Chloe Elise Weaver was born on April 6th, 2012 at 12:20pm, 20" long, 8 pounds, 3 ounces.

Here is a recent picture of her: 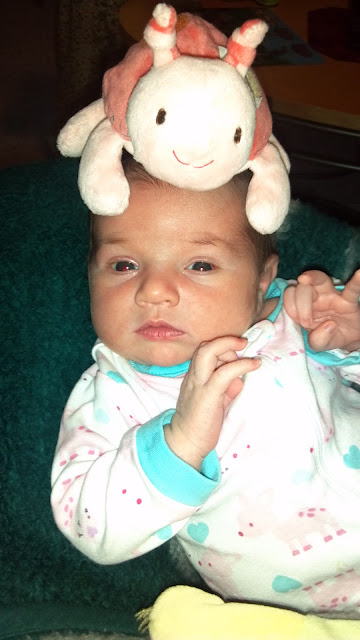 Other than her being a cutie and the ladybug on her head, if you look closely at her left eye toward her left ear, there is a thin band of redness on the white part of her eye. This is the subconjunctival hemorrhage. It's typically a very benign spot of blood found on the white part of the eye, the result of a broken blood vessel. The broken blood vessel can occur spontaneously, but it can occur from trauma, such as traveling through the birth canal. A subconjunctival heme also occurs with coughing, sneezing, vomiting...any body function that causes that tight squeezing sensation in the chest, the force just causes the very small and fragile blood vessels of the eye to burst.

The subconj heme will behave like a bruise. It takes about 1-2 weeks for the blood to dissipate, and may look yellowish as it heals up. Sometimes, it may take longer to look normal depending on the amount of blood that was there in the first place.

As you can see, not all red eyes are the same. There is no pain with the subconj heme, and even though it will go away on its own over time, the eyes affected should still be evaluated to check the intraocular pressure, making sure the burst blood vessels are not associated with any type of glaucoma.

Finally, the 8th Annual Rehrersburg Lion's Club Golf Tournament will be held Saturday May 5th, 2012 at Green Acres Golf Course in Bernville. It's $65/person, which includes greens fee, cart, snacks, beverages and prizes. I played in it last year and sponsored a hole, and it was lots of fun. Get in touch with me if you are interested in playing, or call the Green Acres Golf Course for more information. This is a great tournament and a fun time! 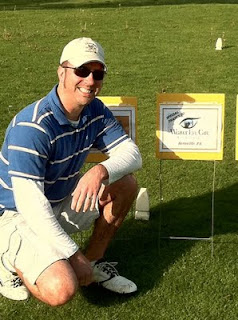 Posted by Weaver Eye Care Associates at 7:54 AM 2 comments: